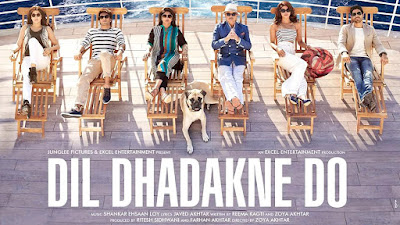 Dil Dhadakne Do (English: Let the Heart Beat) is a 2015 Indian comedy-drama film directed by Zoya Akhtar and produced by Ritesh Sidhwani and Farhan Akhtar. The film features an ensemble cast of Anil Kapoor, Shefali Shah, Priyanka Chopra, Ranveer Singh and Anushka Sharma. With Farhan Akhtar in a special appearance and Aamir Khan performs a voice-over as the narrator of the film. Also with Rahul Bose, Zarina Wahab and many more others in supporting roles. The film tells the story of a dysfunctional Punjabi family who invite their family and friends along on a cruise trip to celebrate the parents' 30th wedding anniversary.
Songs