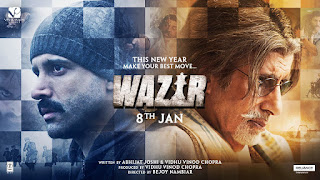 Waziris a 2016 Indian crime thriller film directed by Bejoy Nambiar and written by Abhijat Joshi and Vidhu Vinod Chopra. Produced by Chopra, the film stars Amitabh Bachchan, Farhan Akhtar in the lead roles.The film tells the story of two unusual friends, a wheelchair-bound chess grandmaster and a grief-stricken ATS officer, who are brought together by a peculiar twist of fate as part of a wider conspiracy that has cast a dark shadow over their lives.
Songs