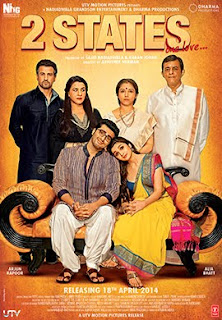 2 States is a 2014 Indian romantic comedy-drama film directed by Abhishek Varman based on the 2009 novel of the same name written by Chetan Bhagat. It is produced by Karan Johar and Sajid Nadiadwala. The film stars Arjun Kapoor and Alia Bhatt in lead roles. The film was released on 18 April 2014.
Songs