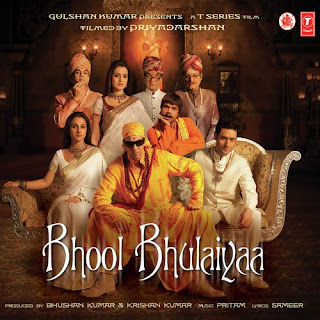 Bhool Bhulaiyaa (English: The Maze) is a 2007 Indian comedy horror film directed by Priyadarshan. It constitutes the official remake of the 1993 Malayalam film, Manichitrathazhu, starring Mohanlal. which was already remade into several Indian films. Bhool Bhulaiyaa features Akshay Kumar, Vidya Balan, Ameesha Patel and Shiney Ahuja in pivotal roles with Paresh Rawal and Rajpal Yadav in supporting roles. The music of the film was composed by Pritam and the lyrics were written by Sameer. It was a critical and commercial success.
Songs