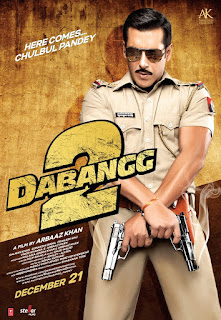 Dabangg 2 is a 2012 Indian action film directed and produced by Arbaaz Khan under the banner of Arbaaz Khan Productions. It is a sequel to the 2010 film Dabangg and the second installment of Dabangg film series. It is written by Dilip Shukla. The story is set in the city of Kanpur. The film features Salman Khan and Sonakshi Sinha reprising their roles from the previous film, whilst Prakash Raj plays the antagonist. he film broke the three-day record set by Ek Tha Tiger by netting around ₹583 million (US$8.7 million) in India. Dabangg 2 has become tenth highest-grossing Bollywood film of all time in India and worldwide. Dabangg 2 is the second-highest grossing Hindi film of 2012 after Ek Tha Tiger.
Songs