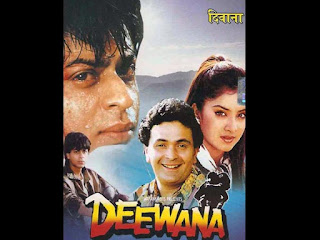 Deewana (English: Crazy or Passionate) is a 1992 Bollywood musical romantic action film directed by Raj Kanwar, and produced by Guddu Dhanoa and Lalit Kapoor and featuring Rishi Kapoor, Divya Bharti and Shah Rukh Khan in the lead. This was Shah Rukh's debut release, and he appears only in the second half of the film. He replaced Armaan Kohli, who walked out of the project due to creative differences after the first schedule.
Songs