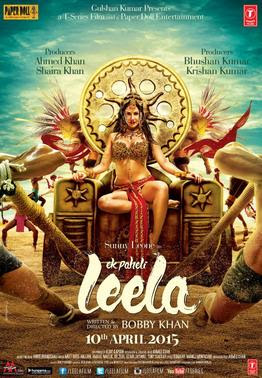 Ek Paheli Leela is a 2015 Indian thriller drama film, written and directed by Bobby Khan and produced by Bhushan Kumar and Krishan Kumar. It stars Sunny Leone in the titular lead role with Jay Bhanushali, Rajneesh Duggal, Jas Arora, Mohit Ahlawat and Rahul Dev in pivotal roles. The film is a reincarnation story which is set 300 years back, and revolves around the story of Leela (Sunny Leone) and her lover. Their love story remains incomplete as they are murdered. The film portrays how their story completes when they both are reincarnated in present time.
Songs