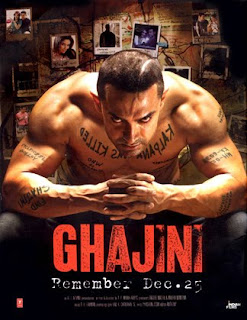 Ghajini is a 2008 Indian action psychological thriller film written and directed by A. R. Murugadoss and produced by Allu Aravind, Tagore Madhu and Madhu Mantena. The soundtrack and score is by A. R. Rahman. It is a remake of Murugadoss's own 2005 Tamil film of the same name starring Aamir Khan in the lead role along with Asin and it became the highest grossing movie of that year and the first Hindi film to cross the ₹100 crore mark. It stars Aamir Khan, Asin and Jiah Khan in lead roles while Pradeep Rawat and Riyaz Khan essay supporting roles. The film's main plot was adapted from Christopher Nolan's Memento and comedy plot was inspired by 1951 British movie Happy Go Lovely.
Songs