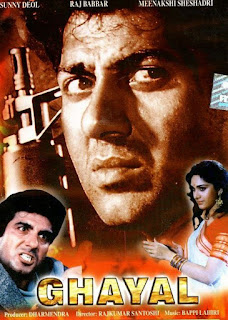 Ghayal is a 1990 Indian action drama film starring Sunny Deol and Meenakshi Seshadri. The film was produced by Dharmendra and directed by Rajkumar Santoshi. The film won seven Filmfare Awards, including the Best Movie award. Ghayal clashed with Aamir Khan's Dil. Ghayal did very well at the box office; it was rated "Super Hit." It was also the second highest grossing Bollywood film of 1990. Ghayal was remade in Tamil as Bharathan in 1992 with Vijaykanth and Bhanupriya in lead roles, in Telugu as Gamyam in 1998 with Srikanth and in Kannada as Vishwa with Shivarajkumar and Suchitra Krishnamurthy. Sunny Deol received the National Film Award-special Jury Award.
Songs