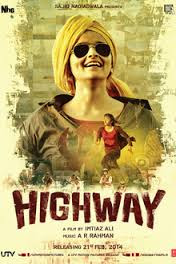 Highway is a 2014 Indian drama film written and directed by Imtiaz Ali and produced by Sajid Nadiadwala. The film stars Randeep Hooda and Alia Bhatt in the lead roles. The film soundtrack album is composed by A. R. Rahman. The album has nine original songs with lyrics of eight tracks penned by Irshad Kamil and remaining one by Lady Kash and Krissy.
Songs