Holiday: A Soldier Is Never Off Duty (Movie Songs) 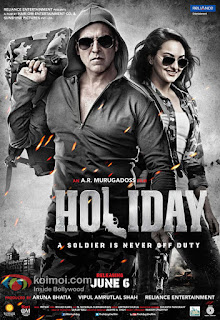 Holiday: A Soldier Is Never Off Duty is a 2014 Indian action thriller film written and directed by A. R. Murugadoss, and produced by Vipul Shah. It features Akshay Kumar and Sonakshi Sinha in the lead roles, along with Farhad as the antagonist in his Bollywood debut and Govinda in a special appearance. It is a remake of Murugadoss' own acclaimed Tamil film Thuppakki (2012).