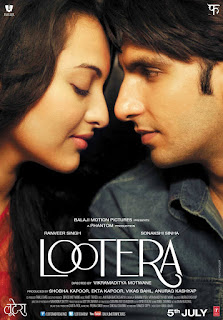 Lootera, (Robber), is a 2013 Indian period romance film directed by Vikramaditya Motwane and partly based on author O. Henry's 1907 short story The Last Leaf. It is the second film directed by Motwane after his critically acclaimed film Udaan. Set in the era of the 1950s, the film stars Ranveer Singh and Sonakshi Sinha in lead roles.
Songs