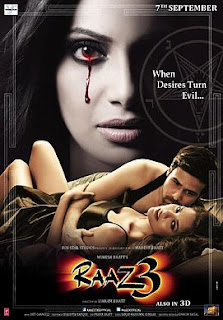 Raaz 3 (also known as Raaz 3: The Third Dimension) (English: Secret 3) is a Bollywood horror thriller film directed by Vikram Bhatt, and produced by Mahesh Bhatt and Mukesh Bhatt.[3] The movie features Bipasha Basu , Emraan Hashmi and Esha Gupta as main characters. The film is the third installment in the Raaz series, being a sequel to Raaz: The Mystery Continues, which itself was a sequel to Raaz which starred Bipasha Basu and Dino Morea. Bipasha Basu who was a part of the first film of the Raaz series, has made a comeback to the series after opting out of the second film. It was one of the films in a series of quasi-sequels released under the Bhatt Banner including Raaz:
Songs