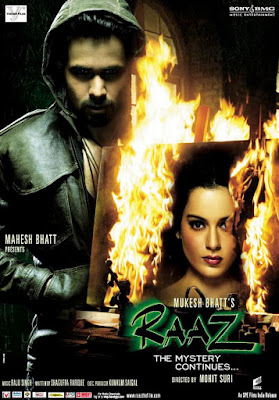 Raaz: The Mystery Continues, shortened as RTMC,  is a 2009 Indian supernatural horror film directed by Mohit Suri and starring Emraan Hashmi and Kangana Ranaut. The film is the second film in the Raaz series, but story-wise, it is not a direct sequel to the 2002 film Raaz. The film deals with issues of the "evil within" the human psyche and how it manifests itself. It is based on the myths and superstitions that are still widely existent in the contemporary Indian society. The film attempts to challenge one’s beliefs about paranormal phenomena. Emraan Hashmi plays a painter, named Prithvi, who has an extraordinary gift, the ability to paint the future. His paintings tell Nandita's (Kangana Ranaut) future.
Songs