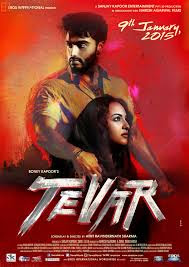 Tevar (English: Attitude) is a 2015 Indian action film directed by Amit Sharma and written by Gunasekhar. The film stars Arjun Kapoor, Sonakshi Sinha, Manoj Bajpayee and Rajesh Sharma in lead roles. It is a remake of the 2003 Telugu film Okkadu which also has been remade successfully in Tamil as Ghilli.
Songs