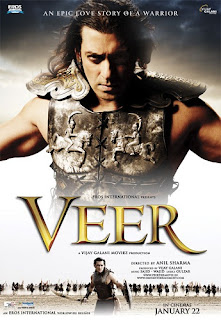 Veer: An Epic Love story of a Warrior is a 2010 Indian action drama film directed by Anil Sharma, and starring Salman Khan, Mithun Chakraborty, Sohail Khan, Jackie Shroff and Zarine Khan. The film was written by Salman Khan and set during the 1825 Pindari movement of Rajasthan, when India was ruled by the British. The film's songs are composed by Sajid–Wajid and the lyrics are written by lyricist Gulzar.
Songs