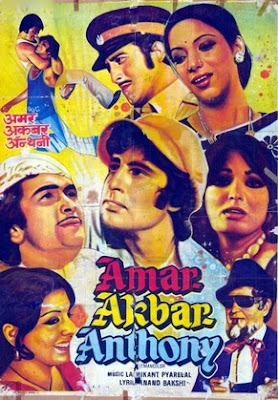 Amar Akbar Anthony is a 1977 Indian action comedy film produced and directed by Manmohan Desai. The film, which is based on the lost and found theme, is about three brothers separated from their parents and each other in childhood, and raised in three different faiths, Hinduism, Islam and Christianity. They unite in their youth to fight a common villain. It was the biggest blockbuster of 1977, and won several awards at 25th Filmfare Awards including Best Actor, Best Music Director and Best Editing. The film stars three actors: Amitabh Bachchan (as Anthony Gonsalves), Vinod Khanna (as Amar Khanna) and Rishi Kapoor (as Akbar Allahabadi). Each of the heroes had an affiliation with a heroine; these women were played by Parveen Babi, Shabana Azmi and Neetu Singh. Nirupa Roy, Pran and Jeevan played supporting roles. The music was composed by Laxmikant-Pyarelal. Kishore Kumar sang for Bachchan and Mohammed Rafi sang for Kapoor. The soundtrack was one of Mukesh's last soundtracks with Laxmikant-Pyarelal. Anand Bakshi was the lyricist.
Songs