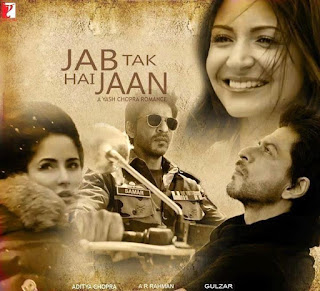 Jab Tak Hai Jaan  is a 2012 Indian romantic drama film directed by Yash Chopra and written and produced by Aditya Chopra. It features Shah Rukh Khan, Katrina Kaif, and Anushka Sharma in lead roles. The movie is the first collaboration between Khan and Kaif, and the second between Khan and Sharma (they previously featured in the 2008 film Rab Ne Bana Di Jodi). Yash Chopra returned to directing eight years after Veer-Zaara. This was to be his final film before his death in October 2012, at age 80.
Songs