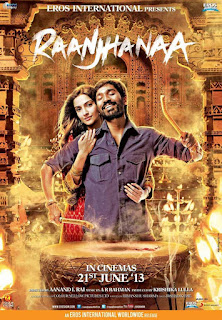 Raanjhanaa is a 2013 Indian romantic drama film, directed by Anand L. Rai and written by Himanshu Sharma.  It stars Dhanush, in his Bollywood debut, Sonam Kapoor and Abhay Deol in lead roles. The film was released on 21 June 2013 worldwide, while the dubbed Tamil version titled Ambikapathy was released a week later. The dialogues for the Tamil version was written by John Mahendran. The background score and songs were composed by A. R. Rahman. The Hindi lyrics of the tracks were penned by Irshad Kamil, whereas the Tamil lyrics were written by Vairamuthu.
Songs