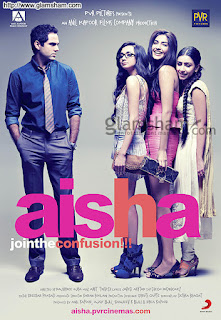 Aisha is a 2010 Indian comedy-drama film directed by Rajshree Ojha, starring Abhay Deol and Sonam Kapoor in the lead roles and Cyrus Sahukar, Arunoday Singh, Ira Dubey and Amrita Puri in supporting roles. It is set in the upper class society of Delhi, India and is an adaptation of Jane Austen's 1815 novel Emma with the same tone as the 1995 cult Hollywood film Clueless which is also an adaptation of Austen's novel. The choreography of this film was done by Neerav Bavlecha.
Songs