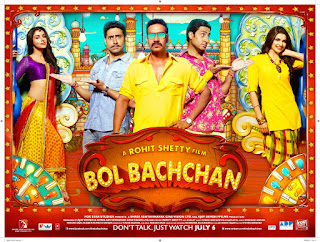 Bol Bachchan is a 2012 Bollywood action comedy film. The film, made on a budget of ₹700 million (US$10 million), is inspired by the 1979 film, Gol Maal. Bol Bachchan's official trailer was released on 24 May 2012 and the film was released on 6 July 2012 in around 2575 screens worldwide with 2700 prints. It received mixed critical acclaim but had a good opening at the box office.The film reportedly made a record for its advance bookings.It was remade in Telugu as Masala with Venkatesh and Ram Pothineni reprised the roles of Ajay Devgan and Abhishek Bachchan respectively.
Songs