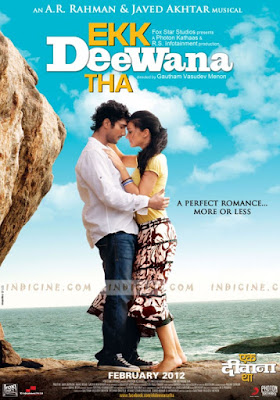 Ekk Deewana Tha is a 2012 Hindi romantic drama film, written and directed by Gautham Menon, featuring Prateik Babbar and Amy Jackson in her Bollywood debut, and in lead roles. The film is a remake of Menon's own Tamil film Vinnaithaandi Varuvaayaa (2010) and features reused soundtrack and film score composed by A. R. Rahman. Singer Chinmayi has provided the talking voice of the female lead, reprising her role from the Tamil version and the Telugu simultaneously made version where she dubbed for actresses Trisha Krishnan and Samantha Ruth Prabhu respectively.
Songs