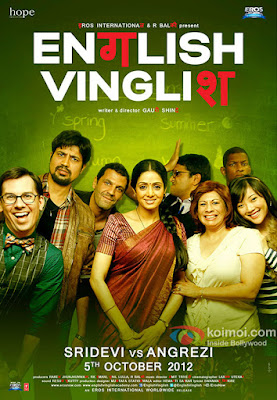 English Vinglish is a 2012 Indian comedy-drama film, written and directed by Gauri Shinde. The film's narrative revolves around a housewife who enrolls in an English-speaking course to stop her husband and daughter mocking her lack of English skills, and gains self-respect in the process. The protagonist, played by Sridevi, was inspired by Shinde's mother. English Vinglish was originally made in Hindi; later it was re-shot in Tamil and released along with a Telugu dubbed version on 5 October 2012.
Songs