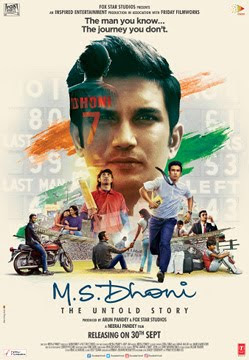 M.S. Dhoni: The Untold Story is a 2016 Indian biographical sports film written and directed by Neeraj Pandey. It based on the life of Indian cricketer and the current ODI and T20I captain of the Indian national cricket team, Mahendra Singh Dhoni. The film stars Sushant Singh Rajput as Dhoni, along with Disha Patani, Kiara Advani, and Anupam Kher. The film chronicles the life of Dhoni from a young age and the series of life events that finally culminates to his stardom in the realm of cricket.
Songs